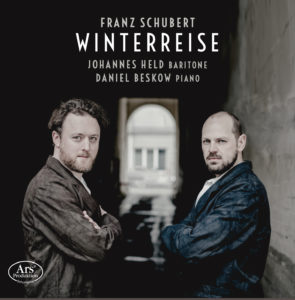 „Expressive and wild, yet calm; so much heart and pain; I think it is the best Winterreise to date.“

Since late 2014, I have been working on a very special project. Through a collaboration with director Ebbe Knudsen, illustrator Jörn Kaspuhl, and a musical partnership with pianist Daniel Beskow, a staged version of Schubert’s Winterreise has materialized.
24 Lieder make up the biggest and most famous cycle of the genre. The idea behind this version is to change the way we perform, listen and look at Lieder. No tails, no holy, concert atmosphere. Our version shows the wanderer out in the snow – a man who has to leave the city behind because his love has chosen somebody else. He searches for a way through his pain as he moves through the winter landscape.
The big difference between this staged version and the the classic way of performing Winterreise shows itself in two elements: the presence of two people onstage, and the stage itself.

1. The presence of two people onstage

Where is the singer in the room? How is he moving, and what is he doing? Where is the pianist, and what is his expression? What is the relationship between the two performers? The classical way of presenting Lieder requires the performer to recite the lyrics within the framework of the music. In this case, the answer to almost all these questions would be: “I don’t know, and it doesn’t matter, as long as the physical presence of the performer doesn’t bother the audience.”
But for me this is a waste of potential. As a stage performer, I am interested in using all of the tools that would be part of any stage performance to express the Lieder. Within every Lied, there is an opportunity for the performer to connect and take the place of the „lyrical I“.  A mere recitation by the performer, without a physical participation in what happens, does not make it easy to enter the world of Lied; especially for new audiences.

Although I do think that a Lied performance can be complete when the physical presence of the performers is used to its full potential, we decided to go one step further for this project. Jörn Kaspuhl has made seven pictures which are revealed throughout the cycle. As the pictures are removed from their two metal frames, they build another sort of structured landscape on the ground. It feels as if Winterreise was made for this kind of approach! The performer is confronted with a visual element, pulled from Kaspuhls boundless imagination, to which he can react.
The wanderer observes this winter world and relates his surroundings to the struggle happening inside of him, and the audience can follow him on his way. For example, the wanderer sees a frozen river with a strong current rushing underneath the ice, and compares this image to his own tortured memory boiling under the surface of a composed facade. This sort of comparison, supported by illustrations, is a perfect opportunity for the modern audience to identify with this young person on its journey. We, in 2015, still endure the same struggle from a loss that Schubert did in 1828.
There is not a picture for each Lied. Instead we use pictures to give this vast cycle a structure. The wanderer begins at a train station. He stands beneath a Lindenbaum in a forest. In Lied 11, Frühlingstraum, he encounters a colorful and strong image, which tells us about the the dream he had at night. But, the ecstasy is gone as quickly as it appeared, and he finds himself back in the train station; he was walking in circles and has to start over. Die Krähe, the crow, is a companion who follows him for a long time on his journey. In a final burst of color in Nebensonnen, (23) he glimpses his loved one for the last time. Finally, the wanderer meets the Leiermann, and our journey ends.
If you are interested in having this project at your venue, please, contact me! To see when and there are shows of this performance, go to „Kalender“.